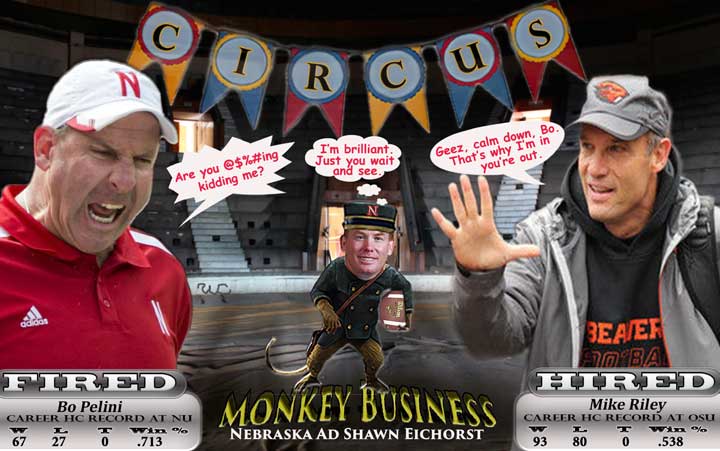 Monkey Business: Nebraska University Athletic Director Shawn Eichorst takes huge gamble firing a winning coach and replacing him with a coach that has a college career win-loss percentage barely over .500.

In his fourteen seasons at Oregon State University, Mike Riley had seven losing seasons. Riley’s Beaver’s finished the 2014 season at 5-7. Apparently Riley’s coaching record was good enough for Nebraska Athletic Director Shawn Eichorst to select the 61-year-old, been around the block several times but really haven’t done anything—at least not in a very long time—to become Nebraska’s new head coach. Of course, this was after Eichorst fired a coach that won at least nine games in each of his seven seasons at Nebraska. Go figure. Odds are that Eichorst will be on the hot seat himself in a couple of year—if not sooner. Because it’s a very rare old dog indeed that can rise from mediocrity to become a champion. However, if Eichorst is right and Riley can somehow find the magic he once had back in the late ‘80s when he won two Canadian League Football Grey Cups as the Winnipeg Blue Bombers head coach—then folks will be calling Eichorst a genius. Good thing Eichorst is gambling with house money. Stay tuned for the rest of the story.

“Just cause you got the monkey off your back doesn’t mean the circus has left town.”