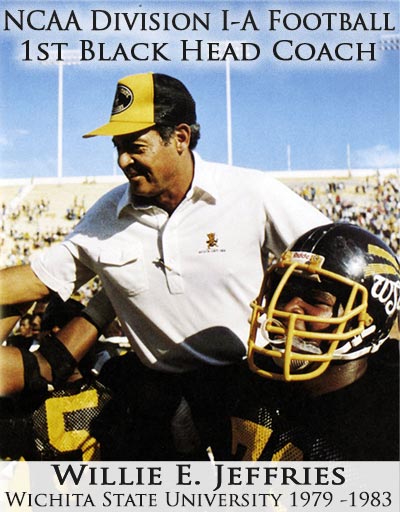 In 1979, Willie E. Jeffries became the first Black man hired as a head coach for a NCAA Division I-A football program when he took the job at Wichita State University (WSU). Jeffries served as the Shockers’ head coach for five seasons (‘79 through ’83), posting his best season in 1982 when the Shockers went 8 -3, finishing 2nd in the Missouri Valley Conference.

Unfortunately, Willie Jeffries’ tenure at WSU became mired in controversy when the NCAA cited him and his coaching staff for numerous rules infractions to include recruitment violations.  As a result of the NCAA findings, Jeffries was terminated and the WSU football program was placed on probation for the ’83 and ’84 seasons.

Willie E. Jeffries was elected to the College Football Hall of Fame in 2010. His major accomplishments during his distinguished 29-year-long career as a college head football coach included being the first African-American head football coach at a NCAA Division IA program and winning three Black College Football National Championships at South Carolina State (’76, ’77 and ’94).

The Sports Highlights USA list of Black Head Football Coaches at NCAA Division I-A Schools is dedicated to Willie E Jeffries and to all the Black pioneers that came before him, and to all those that dare to lead the way into the future.

Studies from The Institute for Diversity and Ethics in Sports (TIDES), which serves as a comprehensive resource for issues related to gender and race in amateur, collegiate and professional sports, show that approximately 54.3% of the student-athletes on NCAA FBS teams are African American (as of 2018). The latest interim U.S. Census data from 2015 estimates that Blacks represent 13.3% of America’s population. But you’re telling me that the representation of Black head coaches in the FBS can’t even match — let alone exceed — the U.S. Black population figures?

These figures are even more disturbing considering that the majority of NCAA FBS players are African American—and it has been so for nearly three decades.

For a more in depth discussion on this topic, check out ESPN’s Ivan Maisel’s article  “The lack of Black college football coaches is still glaring, and so are the excuses behind it,”

In light of the pending racial discrimination lawsuit bought by former Miami Dolphins Head Coach Brian Flores against the NFL, it’s vital that we also keep our eyes and ears tuned to the professional ranks. Especially considering Black players represent approximately 70% of the NFL team rosters, and as of this writing (2/3/2022), the NFL only has one African American head coach, Mike Tomlin (Pittsburg Steelers).

Perhaps the NFL and its owners believe that this year’s Super Bowl Halftime Show featuring Mary J. Blige, Dr. Dre, Snoop Dogg, Eminem, and Kendrick Lamar are enough crumbs to lull us back into complacency. Think again. This good ol’ boy plantation game has gone on too long, and a reckoning is coming. We wish Brian Flores much success in his lawsuit. And may the fans, entertainers, and celebrities do all that’s necessary to make a change.

How to Manage the College Football Recruiting Process