Can Cameron Newton Rise Above His Troubled Past to Claim the Heisman? 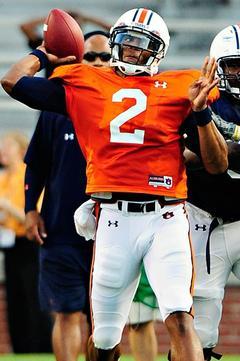 2010 Heisman Trophy candidate Cameron Newton: the 6-6, 250 pounder is arguably the best college QB in the country.

A howitzer for an arm and the legs of a cheetah, Auburn Tigers QB Cameron Newton (6-foot-6, 250) is quickly emerging as the top choice in a loaded field of outstanding 2010 Heisman Trophy candidates.   But when it’s time for voters to cast their ballots will they be able to overlook Cameron Newton’s troubled past?

Regarded by Rivals recruiting service as the nation’s No. 1 high school quarterback in the class of 2007, Newton committed to the University of Florida, where as a freshman he backed up 2007 Heisman Trophy winner Tim Tebow. However, things turned sour for Newton during his sophomore year when he allegedly purchased a stolen laptop and threw it out the dorm window, after the police arrived to question him about the incident.

The ramifications in regards to the episode were great enough that Newton left the University of Florida and enrolled into Blinn College, a JUCO located in Brenham, Texas.  Athletically, Cameron Newton did not skip a beat at Blinn– turning lemons into lemonade, he guided Blinn to a 2009 NJCAA national championship victory.  The best JUCO QB in the Class of 2010 then landed himself back into the big show at Auburn.

Through seven games this season at Auburn, Newton has put up some astonishing numbers: amassing 2,138 total yards and 25 TDs (12 rushing and 13 passing) and a  blistering QB rating of 180.5.  Out of a tight and talented Heisman race at the beginning of the season, a clear-cut leader of the pack has emerged—Cameron Newton.

Can Cameron Newton’s amazing performance this season be enough for him to win a Heisman Trophy–especially in light of the aftermath of the recent Reggie Bush fiasco?  The old guard Heisman balloters have just gone through major damage control with Bush, so you can bet that they will be looking long and hard for a college student/athlete who will best represent the legacy of the prestigious Heisman Trophy Award. Consequently, as  great  a season as Cameron Newton is having—even if he extends his pace and leads the Tigers to an undefeated campaign and a BCS title appearance—it still may not be enough to overcome the alleged transgressions of his past.

On the other hand, if  Cameron Newton continues at his present tempo through the remainder of the season, he will have produced some of the most prolific QB statistics in the history of  Division 1A college football. Couple that to an undefeated season–how could Cameron Newton be denied the Heisman Trophy?